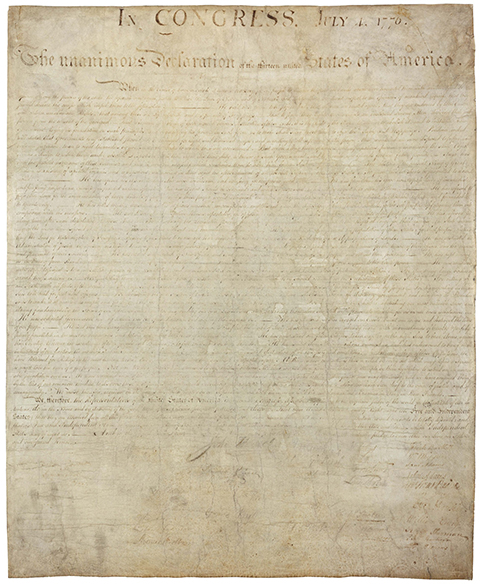 Reading of the Declaration of Independence

The Biddeford Historical Society's annual reading of the Declaration of Independence.

Join us on July 17th to learn about the First Parish Meetinghouse and Biddeford's first reading of the Declaration of Independence there on July 24, 1776.

Please send an email to RSVP your attendance.

July 4th celebrations might be over for us now, but back in 1776 news travelled slowly! Check out this history of the Declaration of Independence and its introduction to our town...

On the 30th day of July 1774 the town of Biddeford became a cornerstone of the supportive measures being made in grievances against the Mother Country of the United Kingdom. The Resolutions read by the Town Clerk, Rishworth Jordan, were part of a unifying effort with other colonial governments existing in all of the thirteen original colonies.

Overwhelmed by “unjust taxes, blockades of the port of Boston, the civil government being redesigned to meet Great Britain’s desires,” and loss of individual civil rights for "freed men," Clerk Jordan read a document to the citizens of Biddeford at the Meetinghouse to a large gathering of its citizens. The support for the resolutions adopted by the First Continental Congress was overwhelming. Those who did not support this document of agreement were to be treated as an “enemy to this country.” (Folsom, 1830, p. 277) (York, 1944, pgs. 26-28)

Through the use of the Committee of Correspondence there would be delivered a signed petition from the town of Biddeford along with all other towns in the Province of Massachusetts addressing the many issues previously mentioned. At this point there was no official move for separation. Our colonial citizens simply demanded fairness in political and economic settings as had been enjoyed previously. These words best describe the identity of labels which they wished to be restored and protected, “Conducive to the restoration of our Natural Rights as Men and our political Rights as Englishmen.” There was still no call for revolution. (Folsom, 1830, p. 277)

As we know, the frustrations and highly awkward relationship between the colonies and Great Britain worsened for the next two years. The economies worsened, civilian politics was usurped by military rule, and the future was very bleak - without hope for peace. As was the case throughout the colonies, the Committee of Correspondence for each town would be the means for gathering and delivering information concerning actions that opposed the British attack on colonial rights. This was a “state of the art” system of communication for the time and it worked very well. Instructions were sent forth by horseback riders to the various local headquarters of the Committees.

On July 4, 1776 the Continental Congress met in Philadelphia and the document written primarily by Thomas Jefferson would mark the cessation of political ties to the United Kingdom. This Declaration of Independence would mark the beginning of a great experiment in democracy with the now classic words of, “ We hold these truths to be self evident, that all men are created equal, that they are endowed by their Creator with certain unalienable Rights, that among these are Life, Liberty, and the pursuit of Happiness.” This momentous event would become officially celebrated as Independence Day yearly on the 4th day of July each year.

In agreement with orders from the Massachusetts Council, a copy of the Declaration of Independence was read upon its arrival in Biddeford. Thirteen days after the signing of the Declaration under the leadership of Benjamin Nason, Jonathon Smith, Joseph Morrill, John Dyer, and Amos Gordan citizens were ordered to assemble at the First Parish Meetinghouse on the Pool Road and listen to the reading of the Declaration of Independence for the first time in our history. This event would take place at the end of “Divine Services.” (Folsom, 1830, p. 280) The emotions and mettle of all our ancestors would be tested again for the next seven years until the completion of the War for Independence. We can only imagine the inner feelings of the men, women, and children who traveled back to their homes by foot wondering, questioning, and exalting about just what had taken place. An “imperfect union” had arrived with democracy as the binding force that has enabled us to this very day to address our concerns and issues from minor to major in a manner implementing the right to vote as our most powerful source of directing the path to the future.