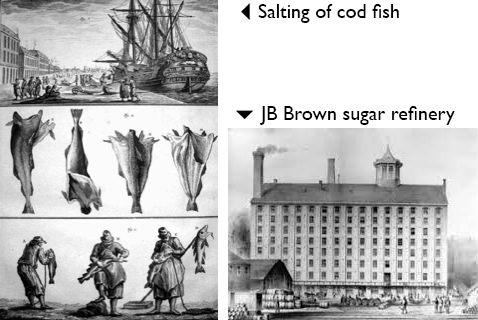 Seth Goldstein: Portland and Maine’s Complicity in the Economics of Atlantic World Slavery

Seth Goldstein, M.A. grew up on Cape Cod where he developed his passion for maritime history. He received his B.A. from the University of California at Santa Cruz and his Master’s in World History from Northeastern University.

Seth has worked with Greater Portland Landmarks and The Portland Harbor Museum. He taught at the University of New England and at Southern Maine Community College before landing his current position at The Maine College of Art.

Seth is with Atlantic Black Box and is now the Director of the Cushing Point Museum is South Portland as well. Atlantic Black Box is a grassroots historical recovery project that empowers communities throughout New England to research, reveal, and begin reckoning with the region’s complicity in the slave trade and the global economy of enslavement while recentering the stories of its racially marginalized groups. As a collaborative research platform and a learning community, ABB serves as a hub and a clearinghouse to all those who wish to support this work.

He also provides guided historic walking tours of Portland’s Old Port neighborhood. Seth sits on the board of the South Portland Historical Society and lives in South Portland with his wife and two daughters.

The first image is the salting of cod fish in 1772 and the second image is the JB Brown sugar refinery that was a thriving business in Portland before it was destroyed during the great fire of 1866.

You're sure to learn more at this intriguing lecture.