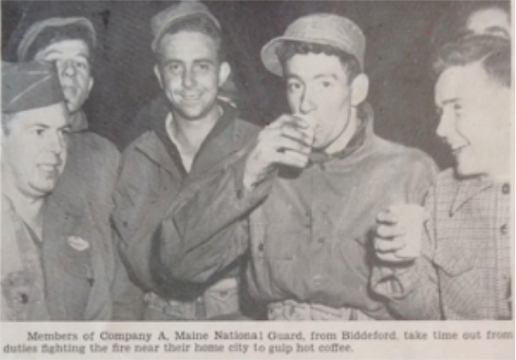 The historic Biddeford meetinghouse’s pews were filled to near capacity last night as we all took a trip back in time to the Fires of 1947 and discovered the profound effect the fires had on people’s lives.

Jo Radner, a professional storyteller, brought us back to Brownfield, Maine and the events leading up to the Fires of 1947. The stories were of real people who were struggling to save their things and each other in the face of a fire that took down 80% of the town in its wake. People scrambled to save furniture and shift it to “safe places” to avoid the flames. In one of the last shifts of furniture, they had to leave a beloved piano behind. It is ironic that the piano was the only furniture to survive. All of the other furniture burned.

Jo pointed out that Brownfield was not an affluent town like Bar Harbor. Many people lost all of their possessions and had to buy “tin houses.” In fact, the school that was rebuilt after the fire was a combination of four tin houses. Tin houses were comprised of corrugated metal pieced together and built on top of plywood floors. When mothers washed the floors of their tin homes, a thin sheet of ice would appear. They had to put blankets on the walls to ward o February’s frosty winds.

There was a “make-due” spirit with the Brownfield survivors. They felt fortunate to have tin houses and to be alive. They were not victims of the fires, but proud survivors.

After a brief intermission, we were privileged to hear first accounts from people who remembered the fire.

These stories were our windows into this event. They brought us the emotions, the sounds, the smells and the color of the re so we felt that we were there.

A 94 year-old man told us how he fought the fires in Biddeford and how devastating they were.

A man who was six years old at the time relived the event for us. He said he was in class at St. Joseph’s School and the teachers told the class they needed to go home now. It was an emergency. He said he ran as fast as he could to Five Points in Biddeford. He lived in a duplex that is now the parking lot for TJ’s Pizza. He described how scared he was and how they watched the fire from a distance. With four gas stations at Five Points, he told us that if the fire reached Five Points, we would no longer have a Biddeford. He said that all that he could smell was smoke.

A woman whose family lived on Oak Ridge Road told how us how the res touched her life. She was born much later than 1947, but her parents and brothers remembered the fire. Her family owned the Tanner Inn in Fortune’s Rock. Once the fire swooped into Fortune’s Rock, all that was left was the Tanner Inn sign.

A woman who was 11-years old at the time of the fire said how annoying it was that her mother would wake her and her siblings up during their sleep. She later learned that this was because her mother was afraid of her children suffering from smoke inhalation.

Another person said her parents were dating at the time of the fire. This was well before she was born. Her father went off to fight the fire and was missing for three days. Her mother thought that he was dead. He was saved by the wet hose around his neck and woke up to see the trees and earth burned around him.

These are only a few fragments of the stories. At our next Fireside Chat on Friday, November 10th at 7 pm, we will show a short video on the rst accounts of the fires.

The Fires of 1947 are a story of devastation, but they are clearly a story of triumph. It’s the power of the human spirit, of community and of bravery and courage. The volunteer firefighters risked their lives to save Biddeford today. Brownfield nearly had their whole town consumed in flames, but they survived. Biddeford mothers did everything they could to save their families.

A big thanks to our co-host of this event – The McArthur Library. And thank to you Jo Radner and all of our attendees who shared how these fires affected their lives.

If you have stories of the fire that you would like to tell, please contact us at biddhistsoc@gmail.com.