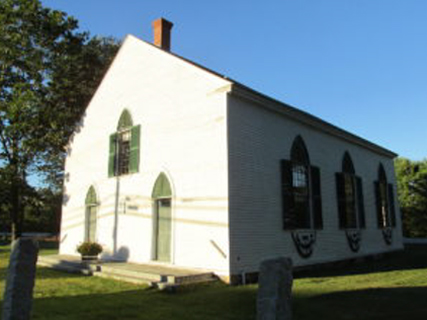 The year was 1817. Biddeford had weathered a erce battle against the British resulting in the complete destruction of Thomas Cutts’ marine store in Biddeford Pool. One of his sloops, the Equator, was damaged beyond repair, and the other, the Equinox, was taken for ransom.

The War of 1812 was a war that very few in Biddeford wanted. Many of our citizens were so fired up that they drafted a petition voicing their disapproval and sent this petition to Congress.

Many citizens felt that their Massachusetts government didn’t care that the British were wreaking havoc on our town and our industry.

It was during this period of unrest and discontent that the fifth President of United States decided to pay one of our Biddeford Greats, George Thatcher, a visit.

President Monroe’s goal was simple: He wanted to bring the country together. He wanted to temper the bitter political divisions between the Federalists and Republicans, between the North and South and other rifts that threatened to tear our country apart.

He was intent on cultivating, as one Boston journalist put it, “an Era of Good Feelings.” To usher in these good feelings, President Monroe embarked on goodwill tours from 1817 and 1819 and Biddeford, Maine was one of the first stops on his tours.

It is unfathomable for us in 2017 to imagine the excitement and fanfare of a President visiting Biddeford in 1817. Biddeford was a small place in 1817. There were no mills, no Main Street as we know it and it still had the feel of an agrarian society.

President Monroe presented himself as the consummate statesman on these goodwill tours. He wore his Revolutionary War uniform and tied back his powdered hair in 18th century fashion. He was dashing and evoked valor and bravery.

Many of our townspeople could still remember the American Revolutionary War and no doubt, witnessed one of their own – Jeremiah Hill and his men – marching down Guinea Road to the war front. Many more were present at the Biddeford Meetinghouse when the Declaration of Independence was read in front of the crowd that gathered.

President Monroe, in his Revolutionary war garb, symbolized where we had come as a nation. He never came across as a leader of a triumphant party, but instead as the head of our country. To those who met him on these tours, they said he radiated kindness and peace.

And President Monroe was here in Biddeford, Maine. He was here to have lunch with one of Biddeford’s prominent citizen’s, George Thatcher. George Thatcher was a practicing lawyer, a graduate of Harvard College and a delegate from Massachusetts to the Continental Congress. He was instrumental in helping to sponsor the creation of Bowdoin College because he believed that Maine needed its own institution of higher learning.

Join us as we celebrate this Presidential visit to Biddeford on July 15, 2017 at 11 AM. We will set the stage for this visit, read excerpts from George Thatcher’s letters and give you an inkling of what life was like in Biddeford in 1817.