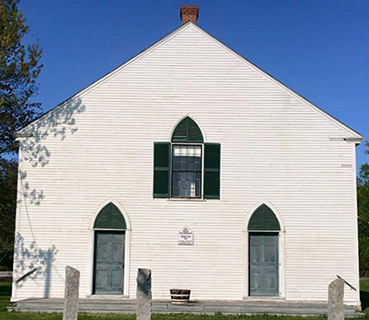 A big thanks to Zuke Roofing for their help in restoring the roof of our beautiful meetinghouse. With their generous rates, we were able to put on a new roof and avert serious damage to this magnificent 258-year old structure. Our 1759 meetinghouse is the earliest meetinghouse in Maine and the oldest public building in Biddeford and Saco.

She has been with us before we were a country — when we were just a little town in the wilderness.

She stood proud when all of our forefathers and foremothers gathered to read the Declaration of Independence in July of 1776.

She was there when the British attacked us during the War of 1812.

Civil war soldiers gathered on her doorstep before they went off to fight and their photos are hanging from her walls.

She witnessed the American Revolution, War of 1812, World War I, World War II, the Vietnam War and many other conflicts.

But, she is in desperate need of help. She has been sitting on granite rubble for 177 years and is in urgent need of a new foundation. We only have five more years left and she will start to crumble.

She has been there for us — isn’t it time we are there for her?